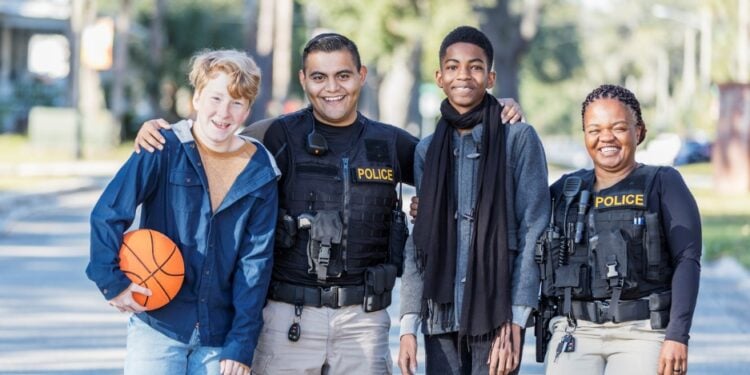 Without a doubt, there has been a strained relationship between law enforcement officers and communities worldwide. The trust gap has been significant, especially in the wake of recent incidents involving the use of deadly force by police officers, and their legitimacy has been questioned. The result has been increasing public insecurity.

Fortunately, maintaining public safety through community policing has recorded tremendous success. Community policing depends on police agencies and the communities they serve to develop strong relationships based on mutual trust.

Community policing helps citizens gather information on crime in their communities and collaborate with the police in coming up with solutions to problems related to crime and disorder. Similarly, police must act respecting community values and procedural fairness to gain trust.

Officers can acquire these values through policing degrees such as the Laurier Bachelor of Policing program. Taught from Wilfrid Laurier University, one of Canada’s reputable institutions, the program equips officers to become competent leaders capable of serving the community and exploring other possibilities to improve the lives of the public they serve.

What is community policing?

Community policing is an approach that integrates the shared responsibility of the community and law enforcement officers in ensuring a safe and secure environment for all. It is an ideology that encourages community-based organizational tactics to deal with prospective circumstances that could endanger public safety.

It provides a platform where safety issues are discussed jointly, and solutions are found and implemented. Community policing strives to uphold the law and maintain order in localities without race, ethnicity, or religious discrimination.

Ethnic, religious, and the system of organized law enforcement have long discriminated against some oppressed groups. The unfair treatment usually results in the emergence of circumstances that lead victims into crime.

By preventing such discrimination, community policing is a way to uphold law and order with fairness for all effectively.

Community policing is a philosophy (way of thinking) and a way to put the philosophy into practice (organizational strategy). The process enables the police and the community to collaborate closely in finding innovative solutions to the problems of crime, illicit drugs, fear of crime, physical and social disorder, and the general quality of life in the community.

The ideology operates on the assumption that citizens should have a say in how the police work for them to be able to offer their cooperation and support. It is also based on the conviction that finding answers to today’s neighborhood issues necessitates allowing citizens and police to consider original, novel approaches to community issues outside of a narrow emphasis on specific criminal episodes.

The organizational plan for community policing first requires all members of the police force, including sworn and civilian staff, to consider how to put the theory of power-sharing into practice. Here are excellent career tips that help community policing officers kickstart their careers.

The complex adjustment is necessary so that everyone in the department knows the need to concentrate on finding innovative solutions to community problems. The process involves frequently consulting with and informing people about policing and how they would want it conducted.

Community policing also suggests a change inside the department that gives line officers more freedom to make judgments. The approach also offers increased respect for their professional judgment. As full-fledged partners with the police, community members must share the rights and obligations associated with recognizing, prioritizing, and resolving issues.

Police agencies put up a new group of line officers assigned explicitly for community policing to serve as a direct conduit between the community’s residents and the police.

All officers should make daily rounds to achieve success. At the very least, community policing officers must be liberated from the confines of the patrol cars to maintain daily, direct contact with the people they serve in a clearly defined manner. Their role should be changed to being the department’s experts in community outreach.

The vast scope of the community policing officer’s job necessitates ongoing, persistent communication with the law-abiding members of the community. The move enables all teams, including volunteers and the public, to jointly explore inventive solutions to local problems.

Community police officers act as law enforcement officers, responding to calls for help and making arrests. However, they can go beyond this restricted scope to create and oversee extensive, long-term initiatives involving all community segments to find solutions to problems. In addition, the community policing officer serves as a liaison to other governmental and private organizations and finds proactive methods of identifying and solving issues.

Community policing suggests a new agreement between the police and the people they protect. The deal promises to overcome widespread apathy while taming any urge toward vigilantism.

The new partnership, built on mutual trust and respect, raises the possibility that the police might act as a catalyst, pressuring citizens to take responsibility for preventing crime without taking unofficial actions.

It entails asking residents to care for more of their minor issues independently. In exchange, the strategy frees police to collaborate with citizens to create short and long-term solutions for community concerns that promote mutual accountability and respect.

The philosophy of community policing encourages interactions between residents and police officers outside the context of dealing with crimes. The move increases overall engagement, but more significantly, it enhances productive interaction.

When citizens who have only interacted with law enforcement concerning criminal activity get to interact with their neighborhood police officers in other contexts, interpersonal relationships and neighborhood relations are enhanced.

Undoubtedly, good interactions with police significantly improve the community’s opinions of them, thus increasing trust. Governments worldwide recognize this achievement and budget enough funds for the project. For instance, the US government dedicated $512 million toward hiring and operational programs for community policing.

In contrast to the incident-oriented strategy that has tended to predominate the policing sector, community policing encourages the development of a problem-solving orientation toward policing.

Naturally, emergency calls still need to be responded to quickly, and officers spend a significant amount of time dealing with individual occurrences. However, community policing looks for the underlying causes of isolated and multiple incidents.

Community policing strongly emphasizes the value of collaborative efforts among law enforcement, the community, and other organizations in identifying and resolving issues. In addition to other government and private agencies using their resources and authority to address public safety issues, community policing allows citizens to play a more prominent role than in previous decades.

The partnership makes citizens feel part and parcel of the solution, making the strategy more productive. Of course, the extent to which citizens might participate in public safety is subject to certain legal and security restrictions.

Police work typically involves unpleasant interactions with the public. Incidents such as arrests, fines, stops for suspicious activity, warnings to stop, and the inability to significantly improve victim situations make the situations tense.

Luckily, community policing acknowledges this fact and teaches officers practical ways of minimizing hatred as much as possible and interacting positively whenever feasible.

Positive interactions naturally have several advantages: they typically increase both sides’ familiarity, trust, and confidence. They serve as a constant reminder to officers that most of the public respects and supports them. They also offer specific information for criminal investigations and problem-solving, breaking up the monotony of motorized patrol.

Community policing strives to put a preventive emphasis into practice. The approach is founded on the rationale that although citizens value and appreciate quick responses, reactive investigations, and the arrest of criminals, they always want to avoid being victimized in the first place.

Most police departments dedicate some resources to crime prevention through a specialized unit. Community policing, however, digs deeper by highlighting the importance of prevention as a critical component of every officer’s role.

Prevention approaches that community policing takes may involve situational crime prevention that develops specific measures unique to a situation’s particular characteristics. Another prevention measure is community crime prevention, where the police department works closely with a group of residents or individual residents to prevent crime.

The focus of community policing is providing personal service to the people, not engaging in rigid and rule-bound activities. The move intends to address one of the most common criticisms the public receives regarding public servants, especially police officers: that they act impartially and treat citizens as numbers rather than actual people.

Of course, not all interactions between police and citizens will be cordial and friendly. However, community officers try to interact with citizens in a way that makes them feel comfortable, open, and satisfied whenever feasible. The easiest way to achieve the relationship is by removing as many artificial bureaucratic roadblocks as possible, allowing citizens to communicate with the police directly through means such as officer business cards, voicemails, slogans, and symbols.

Being incorporated into community policing is a strong belief in the importance and usefulness of civilian involvement in police priorities and practices. Citizens should have a say in government policies in a free and democratic society.

Like other governmental entities, police forces should be accountable and responsive. Through community policing, law enforcement organizations receive valuable support and cooperation from citizens after showing interest in their opinions. Citizen views and suggestions go a long way in preventing and combating crime and making officers’ work more accessible.

Misconceptions about community policing emerge in many instances. Here are four points to clear the air.

Security and development are primarily anchored by community-based policing. The approach provides a problem-solving and crime prevention platform, better interaction, and valuable citizen input in making the community a better place to live and work. A police force with the community’s backing and the ability to arrest insecurity significantly fosters long-term political, social, and economic progress.

However, it is helpful to identify five major principles to understand and utilize the full breadth of community policing. These principles keep the spirit of communication and cooperation between both parties alive despite external and internal forces.

Is There a Gender Gap In Education?

Oxford University Colleges – Where Should I Apply?